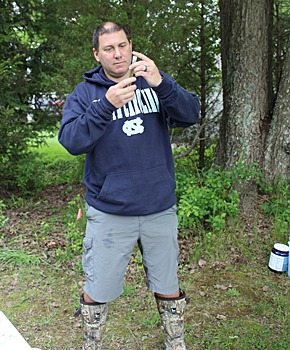 Loudoun Wildlife’s JK Black Oak Wildlife Sanctuary, an 87-acre parcel of land just outside Lucketts, is better known for its vernal pools and mature forests. However, the Sanctuary also contains a small unnamed creek that flows south along the length of the property border and under Route 15, eventually emptying into Limestone Branch right before it reaches the Potomac River.

In keeping with the ongoing efforts to conduct baseline surveys of the native flora and fauna on the property, Loudoun Wildlife’s Stream Team established two survey sites on the stream – one at each end of the property. On May 9, certified stream monitors Amy Ulland, Jason Kahn, Michelle McGregor, Aila McGregor, and Emma Lloyd conducted both benthic macroinvertebrate counts and chemical tests to establish baseline stream health reports for each site.

Benthic macroinvertebrates, fondly known as “macros,” are creatures without backbones that live on the bottom of the stream and can be seen with the naked eye – usually the larval form of insects such as Dragonflies and Mayflies. Macros are great bioindicators of stream health as they vary greatly in their abilities to tolerate pollution.

Although less than a quarter mile from each other, the upstream and downstream sites received very different health scores. The macro sample from the downstream site consisted almost exclusively of Midges, with a handful of Leeches. Both midges and leeches are very tolerant to pollution, so we weren’t surprised that the downstream site scored a 5 out of 12, indicating unacceptable ecological conditions.

The upstream sample consisted of a much broader range of macros including Water Pennies, Riffle Beetles, Stoneflies, Caddisflies, Mayflies, and Midges. Beetles comprised nearly half and Midges less than a quarter of the 746 macros collected at this site in a 30-second sample. Due to the wide diversity of species present in the sample and the predominance of pollution intolerant beetle species, the upstream site scored a 10 out of 12, indicating acceptable ecological conditions.

Chemical tests conducted at both sites provided mostly consistent and acceptable results: normal pH levels of 7; negative or very low levels of nitrates, nitrites, and phosphates; high levels of dissolved oxygen; and low levels of sodium chloride. However, one difference between the sites stood out. The upstream site tested negative for coliform bacteria, while the downstream site tested positive. Coliform bacteria, found in fecal matter, can indicate the presence of other pathogenic organisms in the water.

Loudoun Wildlife’s Stream Team will continue to collect baseline data on the health of the Sanctuary’s stream by conducting macro surveys and chemical tests at both sites semiannually. In the future, we hope to expand these stream health surveys into educational outreach opportunities. 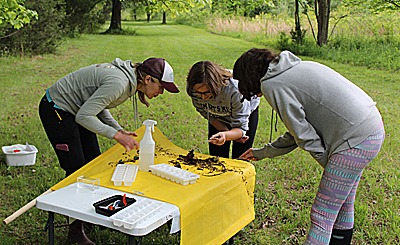 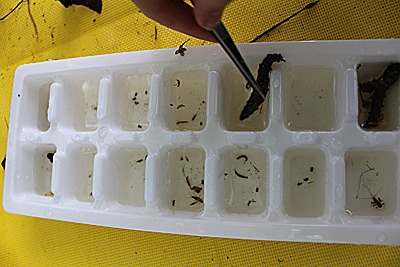 A small sampling of the 746 macros collected from the Sanctuary’s upstream site. Photo by Amy Ulland.

Here is our position statement on “Envision” the 2040 Comprehensive[...]

Book Review: The Secret of Life by Howard Markel

What’s Next for JK Black Oak?