Searching For Birds of Prey 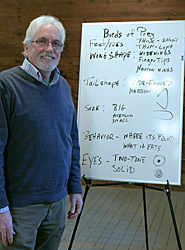 The adventure started with a class taught by raptor expert Liam McGranaghan on February 1. Liam introduced the class to the different species of raptors that migrate into, and overwinter in, the area. After lunch the class broke into three groups to explore various locations north and south of Leesburg.

The most unusual species found in the afternoon were not raptors, but three Greater White-fronted Geese at a pond on Montressor Road, a rare species for Loudoun County. East of Lucketts two Eastern Meadowlarks were spotted. Other highlights included a Merlin, “cuddling” Bald Eagles at the Dulles Greenway Wetlands Mitigation Project, an American Kestrel eating a mouse, and a Barred Owl that gave Laura and Liam McGranaghan’s group great looks. All the groups had opportunities to closely compare perched Red-tailed and Red-shouldered Hawks and a couple of the groups also got to see Northern Harriers. All three groups saw plenty of Turkey and Black Vultures.

The three groups found the following birds of prey: 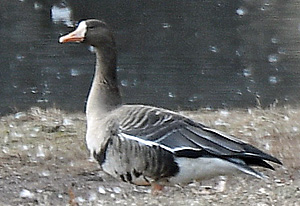 The post Searching For Birds of Prey appeared first on Loudoun Wildlife Conservancy.

The post Searching For Birds of Prey appeared first on Loudoun Wildlife Conservancy.

Masters of Mimicry and Deception in the Insect World

From appearance to behavior, insects have developed elaborate ruses to[...]

Happenings Around the Blue Ridge – November 3, 2022