Living in my house, I am surrounded by ghosts.

The ghosts to which I refer are electrical ones. “Ghost power” is the term used to describe the use of electricity by devices that need power all the time even when they are not doing the one thing they were designed to do. A quick inspection of my kitchen reveals there are nine devices plugged in to electric circuits. Of those, only the refrigerator is drawing constant power to do something useful, and one other, the dishwasher, is not drawing power when it is not actually washing the dishes. The other seven are all using ghost power: five of them have clocks, and two are charging handheld battery-operated devices.

My home office has even more ghosts. There are about 15 devices plugged in (plus four surge protectors), most of which are drawing ghost power. As I sit typing this review, I am using only two devices — my laptop and a desk lamp — but at least nine others plus the surge protectors are drawing some power. It’s a little difficult to calculate how much of our electric use is attributable to ghost power, but estimates are that it is between 10 and 20% of our monthly bills. 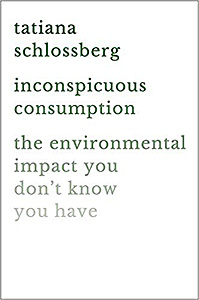 Inconspicuous Consumption by Tatiana Schlossberg illuminates this problem and delivers this message: that we all have a carbon footprint and an environmental impact much larger than we know, or can even imagine.

If you’re like me, you use the internet for a lot of things: email, social networking, shopping, streaming video, and reading newsletters like the Habitat Herald. You know that you use some electricity to keep your computer running or your tablet or smartphone charged, but have you ever considered how much electricity is needed to keep all that information flowing to you? It turns out to be much more than you ever thought it could be. We tend to think of “the cloud” as being an ephemeral mass circulating in the atmosphere, but it’s not.

The physical internet is a huge network of data centers (many of them here in our backyard*), servers, and cables. All of that equipment running all of the time requires electricity, and lots of it. In addition to the power needed to run all of that equipment, as more data moves through the data centers, more heat is generated, so more air conditioning is needed, requiring even more electricity, which in turn requires more power plants to supply all that juice. To put that into climate-change perspective, video streaming alone is estimated to generate 50 million tons of carbon dioxide a year, a little less than 1 percent of the carbon emissions in the U.S. That number is expected to increase at least eightfold in the next 10 years.

And it is not just your internet use, it is what you wear when using your computer, going to work, or doing anything else for that matter. The fashion industry has a large environmental effect that’s mostly hidden from view. We all consider denim blue jeans an iconic American symbol of the Old West. It is also an enormous international business — close to $100 billion is spent on denim clothing every year — with a huge environmental footprint. Cotton takes up about three percent of the agricultural land around the world, and an equivalent percentage of the water used in agriculture. All of that cotton, 57 billion pounds globally per year, is shipped halfway around the world to Indonesia and other locations in Asia to be spun into fabric, and then to Bangladesh and China, where it is dyed.

More water is needed to dye the denim blue — thousands of gallons are needed for every dye lot — and the remaining water is flushed out of the factory into the environment. In the region of China where denim is manufactured, the rivers have been dyed blue. The denim is then sewn into garments, millions of which are shipped back halfway around the world for sale.

Do you love that cashmere scarf you got for Christmas? Its ecological footprint is also shockingly large. Most cashmere comes from the grasslands of Mongolia on the edge of the Gobi desert. Until the early 1990s, cashmere was a luxury item, as there were only about 5 million cashmere goats. Fifteen years later, the number of goats has increased to around 25 million. As a result of all those goats, cashmere is much cheaper, but the grasslands around the Gobi are degrading under their hooves at an alarming rate.

This creates a vicious cycle, as less grass means lower production, which means more goats are needed to generate the same amount of cashmere, and so on. As the Gobi grows, dust storms from the desert grow larger, sweeping across China, mixing with smog from Chinese industry and blowing across the Pacific, measurably increasing the number of smog and dust days in California.

Schlossberg covers many other environmental impacts that occur without us thinking about them. For example, changes to the climate in the Midwest because of corn monoculture; the mining practices and recycling issues associated with the precious metals needed for all our tech devices; issues with food such as the impact of organic farming and food waste; trees in the U.S. being harvested for use as fuel in European power plants; and how ride-sharing may increase pollution.

I do have a couple of caveats about this book. First, while Schlossberg does an amazing job of explaining all these issues, Inconspicuous Consumption is a little short on recommendations on how to address the problems she identifies. The final chapter is only a few pages long and suggests that we try to understand the problems better, ask serious questions of candidates and public officials, and vote — but there’s not very much practical advice.

Second, her writing style tends to be a little bit chatty and filled with interjections. A friend of mine described it as “very millennial,” but I found it a bit much. That being said, Inconspicuous Consumption is an extremely important and eye-opening book, which I heartily recommend that everyone should read.

* Data centers in Loudoun take up 13.5 million square feet with more on the way. Loudoun County estimates that 70% of the world’s internet traffic passes through the county.

Two options are being considered for a pedestrian crossing over[...]

Taking entries for our 2017 Photo Contest

Loudoun Wildlife is very grateful and pleased to announce that[...]