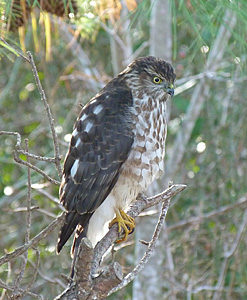 The day started damp and overcast for the 17 birders who joined Larry Meade and Jane Yocom for the October Bird Walk at Banshee Reeks Nature Preserve. However, we were off to a great start seeing an American Kestrel on the wire and a Sharp-shined Hawk across the meadow perched in a snag. The Sharpie took off and chased the Kestrel and a second Kestrel popped up as well. Those who stayed at the back of the group were treated to seeing an additional two Kestrels join the others.

Things got pretty quiet after that with only a few recently migrated sparrows: a Swamp Sparrow and a couple of White-throated Sparrows along the Goose Creek Trail. A Belted Kingfisher was our lone find down by the Goose.

As we returned by the Old Field Loop and Beaver Pond Trail the sun finally made an appearance along with the birds. Those at the front of the group saw a Hermit Thrush perched right by the side of the trail. As he flew across the trail he was quickly joined by two others. A small flock of Cedar Waxwings sat overhead feasting on grapes at the top of a small tree. As we watched several other species flew into the nearby trees including a Swainson’s Thrush and several Ruby-crowned Kinglets. A Magnolia Warbler and a Black-throated Blue were spotted in the area as we stayed to watch the Waxwings but they were not seen by the group.

All told, we identified 41 different species plus one unknown duck species and one unknown warbler species.

Week Ahead for February 14, 2022: Albemarle Supervisors to take up developer incentives for affordable housing

Love of local and regional government is in the air,[...]

Wildflower quilt by Lynn Lothman. You could own a beautiful[...]