Please attend a public meeting on the proposed monopole atop Short Hill Mountain, Thursday, May 10 at 6:30pm at the Lovettsville Game Protective Association at 16 S. Berlin Pike in Lovettsville. Company representatives will share details about the proposed cell site, including the results of the visual-impact survey, and answer any questions from residents, according to a press release. 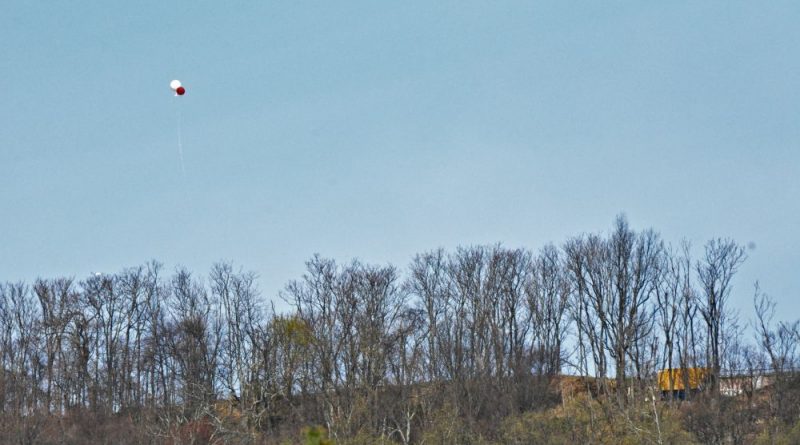 A view of the attempted balloon test at AT&T’s site on top of Short Hill Mountain from Mountain Road on the eastern side of the mountain. The balloons did not reach the tower’s full intended height of 155 feet. (Renss Greene/Loudoun Now)

AT&T has proposed constructing a 150-foot monopole acapped with a 5-foot antenna atop Short Hill Mountain on White Rock Road. The tower would loom above the Between the Hills community. At approximately 1,424 feet in altitude, the site already has clear line of sight and unobstructed terrain to Hagerstown, Md., to Waldorf, Md., and to all the way to Washington DC.

To provide commercial cellular communications in western Loudoun, AT&T would need only a pole that clears the top of the tree line on the site, which typically calls for at most an 80-foot pole. This means the proposed monopole is at least 70 feet too high for any public cellular use AT&T is claiming.

AT&T is hosting a legally-required community meeting at the Lovettsville Game Club on Thursday May 10 at 6:30pm. The proposal would require a special exception from the Loudoun zoning ordinance, which protects the ridge line in the county. Section 5-618 of the ordinance states that, “Telecommunications monopoles shall not be located along ridge lines, but downslope from the top of ridge lines, to protect views of the Catoctin, Bull Run, Hogback, Short Hill, and Blue Ridge Mountains.”

The Short Hill Rescue Community Group has put out a call for the people to attend the May 10 meeting.

How long have you volunteered with Loudoun Wildlife Conservancy and[...]

76 Species of Birds Found on Walk at Algonkian Park