The Grumpy Old Men birdathon team (Paul Miller, Dave Van Tassel, Phil Daley and Ernie Carnevale) withered under clear skies and high temperatures on May 18 and 19, but had a lot of fun despite the heat. On our first day out we covered most of our favorite locations in western Loudoun, spending the morning north of Rt. 7 and west of Rt. 15 (AT Road, Jonella Farm, Ashby Farm, Edgegrove, Harper’s Ferry Brewery and Blue Ridge Center for Environmental Stewardship). 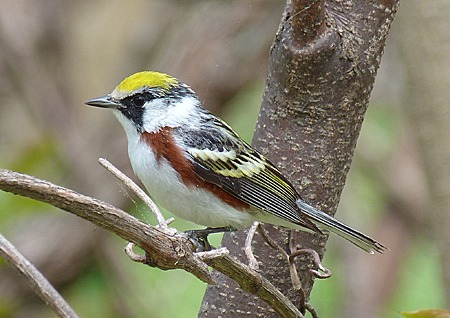 After a nice lunch and cooling drink stop in Hillsboro, we headed to the Ash George Road wetland and Waterford area. Then we went south towards Lincoln and the Shelbourne Glebe and Oakland Green Farm areas. By that time the heat was getting to us, and also to the birds as many evidently took refuge and were not very active.  With 79 species identified, the exhausted team took a break, hoping to revive for the morning.

On Wednesday the team headed towards Leesburg, Lucketts and further east. We had a nice time exploring the Lost Corner area then headed to Bles and Algonkian Parks where we managed to pick up 12 more species before high temperature again limited activities of both birds and men. We headed back towards Purcellville for lunch, where after consultation, decided that 90 or so species was sufficient to meet our goal.  So after another nice lunch and socializing, we called it a fine birdathon effort.

Photo by BJ Lecrone All four people who attended Nancy[...]

Happenings Around the Blue Ridge August 11, 2022

A Wonderful Day at the Park

Over 30 scouts, their parents, and many volunteers gathered at[...]