Eighteen birders joined Michael Sciortino, Dori Rhodes, Jane Yocum, and Mike Scott for the September walk at Banshee Reeks Nature Preserve. Since the initial group was so large, we split into two small groups and covered separate areas of the preserve. Michael and Dori’s group focused on the Raspberry trail field to the west of the Visitor Center, and Mike and Jane’s group went east. It was a spectacularly beautiful early fall morning, and a perfect day for birding.

The observations started coming quickly as the birds around the Visitor Center and parking lot were quite active. Northern Mockingbirds, House Finches and a Brown Thrasher perched in the trees lining the parking lot. A Common Raven flew directly overhead going south and provided us with good looks at its wedged shaped tail as compared to the American Crows that we also flying nearby. It was quickly apparent that the Gray Catbirds were going to win the species count because they were everywhere on this day. Combined, both groups recorded 24 catbirds, which was probably an undercount. 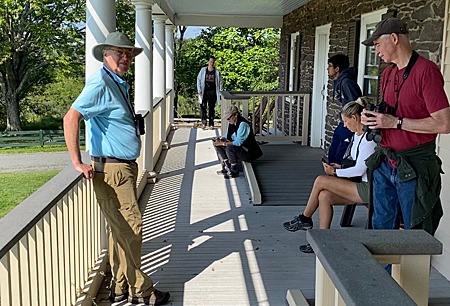 After the tally of birds, some of the group relax on the porch of the Visitor Center.
Photo by Michael Sciortino

The edge habitat along the Raspberry trail to the west provided excellent looks at a Blackburnian Warbler and quick sightings of a Bay-breasted and a Chestnut-sided Warbler. The warblers were certainly active. We also heard numerous vireo species including three White-eyed Vireos, one Red-eyed Vireo, and a lone Yellow-throated Vireo signing from within the field. We did not get our eyes on any of the elusive vireos though.

Mike and Jane’s group recorded five of the seven woodpecker species observed at Banshee Reeks including Red-headed Woodpeckers, Red-bellied Woodpeckers, Downy Woodpeckers, Pileated Woodpeckers and a single Northern Flicker. The highlights for this group were sightings of a Tennessee Warbler, and a last-minute sighting of a female and male Rose-breasted Grosbeaks in the grassy area next to the Visitor Center.

To round off the western group’s walk we could not resist the urge to swing by the silos to look for evidence of Barn Owls. To our disappointment, we saw no such evidence of pellets but there was recent whitewash on some of the vegetation at the base of silo. We could not confirm that this was related to any owl activity though.

Both groups remarked about the lack of vulture activity, but while we were tallying our numbers at the visitor’s center, the vultures did eventually wake up and take to the skies in decent numbers. We recorded numerous Black and Turkey Vultures to finish the day.

Nutrient Banking and You Webinar

Have you heard about the – “Nutrient Banking and You[...]