Flatworm is Favorite Macro at North Fork of the Catoctin Creek 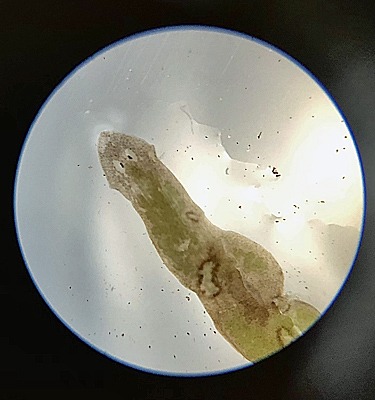 A flatworm, with its distinctive eyespots.
Photo by Cooper Niess

Loudoun Wildlife’s Stream Team recently conducted a series of three surveys along the North Fork of the Catoctin Creek, all of which received scores indicating acceptable ecological conditions. The first site, outside of Hillsboro, received a score of 11 out 12. This site also served as a field training location for Tracy and Cooper Niess, who are in the process of becoming certified stream monitors.

Tracy and Cooper have already watched the two required training videos from the Izaak Walton League of America and passed the benthic macroinvertebrate exam from Virginia Save Our Streams (VA SOS). They worked with VA SOS Certified Trainer Amy Ulland to better understand the specific requirements of the survey protocol and get hands on experience collecting, sorting, and identifying macros before their certification testing later in November.

They enjoyed seeing a variety of macros, including beetles, netspinning caddisflies, mayflies, and midges. However, Cooper’s favorite macro to observe up close was the flatworm, with its distinctive eyespots. These eyespots contain a layer of light-sensitive cells that react to light, which can detect changes in the intensity of light.

Jennifer Venable, Loudoun Wildlife Board Member and Loudoun Soil and Water Conservation District’s Education Specialist, joined the survey to record some videos of the collection protocols for a training video she is developing with Amy. 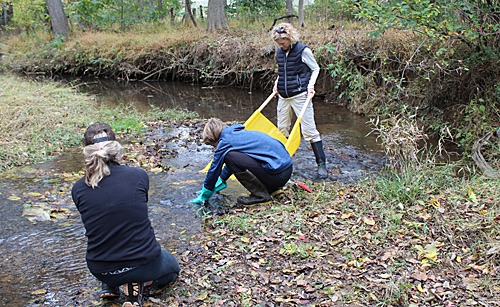 The post Flatworm is Favorite Macro at North Fork of the Catoctin Creek appeared first on Loudoun Wildlife Conservancy.

Join us on a virtual tour with landscape designer John[...]

The Piedmont Environmental Council (PEC) is seeking to hire a[...]