Fourteen birders joined Joe Coleman and Michael Sciortino for the July 24 walk at the Blue Ridge Center for Environmental Studies. It was a relatively mild day with decent temperatures to start and slight overcast skies. In other words, it wasn’t your typical hot and humid July morning, although the humidity did creep up as the morning wore on. The walk took place at the southern section of the property near Sawmill and Butterfly Alley, an area that we hadn’t visited in a while. We were excited to get started and see what we could find.

Overall, the birds were quite active, and we recorded 42 species in total including a few species recorded at the visitor center area before we made our way to the Sawmill location. As we traveled, the group spent a lot of time discussing and testing the merits of the new sound identification capabilities in the latest version of the Merlin mobile application. 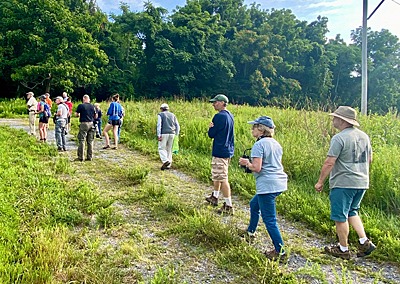 We started at the parking lot area and followed the tree line towards Butterfly Alley. There were a good variety of species along the path with Eastern Bluebirds feeding on the ground up ahead of the group as we walked, numerous Common Yellowthroats, Field Sparrows, and Indigo Buntings singing and calling from the meadow on the left. We did get to see one of the three Red-tailed Hawks recorded on that day as it was sitting on a power line piling watching us form a distance. The field was active with American Goldfinches as they flew from the tree line into the field and back again. We recorded four Ruby-throated Hummingbirds feeding at plants and flying straight and fast over the meadow.

While at Butterfly Alley we began to hear Yellow-Throated and Red-eyed Vireos on the edges of the tree line but we were not able to get any good visuals or photographs. Hearing the two songs so frequently and so close together did help some of the members of the group distinguish between the two songs. We heard and saw eight Red-bellied Woodpeckers flying into and calling from the woods as well.

We carefully fording Sweet Run as it crosses Butterfly Alley and then checked each other for ticks as we did start to see some of the pests showing up on our clothes. The group then ducked into the woods to see what woodland species we could find. We crossed Sweet Run again and continued along the full length of the Sweet Run Loop trail. We heard and recorded a lone Louisiana Waterthrush calling near the Little Turtle Trail and heard a single Ovenbird in the vicinity of Arnold Lane. We recorded approximately eight Acadian Flycatchers, seven Eastern Wood Pewees and one Scarlet Tanager while on the loop. We also heard two Wood Thrushes calling from deep in the woods in two different locations of the woodland area.

The group made its way back along the tree line path to the parking area and got good views of a Pileated Woodpecker as it flew west over the meadow. One participant spotted a Mississippi Kite flying from right to left over the meadow. We returned to a packed parking lot as our own cars, combined with the recently arrived horse trailers, made for a congested parking area. Finally, while we were tallying our bird observations, our first and only Tree Swallow appeared and made it onto our list at the last minute.

For a complete list of our bird sightings, visit e-Bird at https://ebird.org/checklist/S92222679.

The post A Tree Swallow Brings the Species Total to 42 at the Blue Ridge Center appeared first on Loudoun Wildlife Conservancy.

The post A Tree Swallow Brings the Species Total to 42 at the Blue Ridge Center appeared first on Loudoun Wildlife Conservancy.

A new draft of Loudoun's Zoning Ordinance is ready for[...] 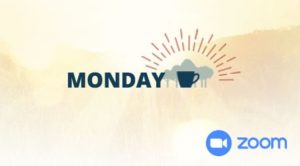