A Muggy and Buggy Walk at Blue Ridge Center, But Well Worth the Time

On a muggy and buggy Saturday, typical for the end of August, 14 birders joined Mary Ann Good, Jane Yocum and Michael Sciortino for a morning of birding at the Blue Ridge Center for Environmental Stewardship. We recorded a respectable 44 species for the morning. The group traveled along our standard route in reverse with a quick look at Wortman Pond where numerous American Goldfinches sat together just above the waterline on a fallen branch. We did witness a flyover by a Wood Duck that took a quick peek at the pond and kept flying. 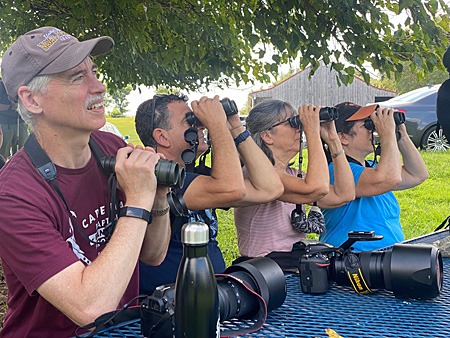 Demory Field was active with Cedar Waxwings, Blue-gray Gnatcatchers (and gnats), and a few Indigo Buntings. We did get views of two Orchard Orioles before we entered the woods on the Farmstead Loop. The temperatures dropped nicely in the woods, but so did the bird activity until we eventually made our way to the Piney Run Spur where we began hearing an Acadian Flycatcher calling. Red-eyed Vireos were plentiful throughout the trip as were White-breasted Nuthatches and Carolina Wrens. Yellow-billed Cuckoos also accompanied us for pretty much the entire walk with the group recording eight throughout the day.

One of the highlights of the walk was a Canada Warbler on the Piney Run overlook across from the Little Turtle trail. This gray and yellow songbird displayed its bold black necklace across its chest. It was a great find and was our first warbler of the day. The old bridge area was quiet except for a noisy Red-eyed Vireo and an additional Acadian Flycatcher. The resident Eastern Phoebe was not home near the bridge.

In a bit of a departure from our standard route, the group decided to detour onto the Derry Loop trail — a trail that we rarely visit due to time constraints. The calls from a Hairy Woodpecker stopped us in our tracks, and we were lured in by sights and sounds of a Black and White Warbler creeping on a branch. This warbler was an additional highlight of the walk. It hung around so that most attendees were able to see it. The warbler was joined by numerous other species, including Carolina Chickadees, Tufted Titmice, and Downy Woodpeckers. This was an enjoyable diversion and a first for many. However, we did make our way back to the parking lot area a little later than we expected.

While we compared our extensive observations and reconciled our eBird lists at the picnic table, we recorded our final bonus species: Common Ravens and a lone Cooper’s Hawk patrolling the skies. Two additional Ruby-throated Hummingbirds chased each other and harassed an Eastern Bluebird sitting on the overhead wire.

For a complete list of the birds recorded, see below or view on eBird: https://ebird.org/checklist/S117644448.

The post A Muggy and Buggy Walk at Blue Ridge Center, But Well Worth the Time appeared first on Loudoun Wildlife Conservancy.

By now, you’ve probably read about the balloon test conducted[...]

Site Description: Black Branch is a tributary of Goose Creek,[...]