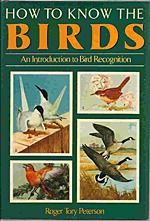 Seventy years ago, Roger Tory Peterson, author of the first great field guides to the birds, wrote “an introduction to bird recognition,” which he called How to Know the Birds. Aimed at beginning bird watchers, the book was part Birding 101 textbook and part sales brochure for the Peterson field guides.

Unfortunately, Peterson’s book has not stood the test of time. While the chapter on what to generally look for in terms of field marks, behavior, and song is still very useful, I would not recommend it to a beginning birder for several reasons, although experienced birders might find it nostalgic.

The standard names of many of the birds mentioned in the book have changed since the book was published. While most of these changes involved adding a geographic term (Northern Cardinal, Eastern Phoebe) or some other descriptive (Yellow-bellied Sapsucker, Great-crested Flycatcher) to the bird’s name, a few of them are wholly unrecognizable. Do you know the modern names for these birds: 1. Baldpate; 2. Man-o’-War-Bird; 3. Old Squaw; 4. Water Turkey; 5. Wood Ibis? (Answers are at the end.) 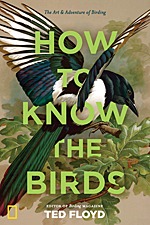 The world has changed in many ways since 1949, and Peterson’s book does not reflect those changes. A list of the challenges that birds face today would include, at a minimum, climate change, habitat reduction, light pollution, outdoor cats, and skyscrapers. Peterson mentions none of these. In fact, the only concern mentioned in the book is the hunting of raptors, which he refers to several times, and which is now illegal in most cases.

Birding has also changed, especially in the last decade. In Peterson’s time, all you really needed was a pair of binoculars and a Peterson’s Field Guide. Now, there are all sorts of technological innovations: digital field guides, digital cameras, apps like Merlin and eBird, sound recordings, and more.

To fill this lack of an introduction to the world of birding in the modern age, Ted Floyd, editor of Birding magazine, has adopted Peterson’s title but completely changed the approach to the subject. This new How to Know the Birds is organized as a year in the life of a birder with 200 one-page chapters each highlighting a common bird you might find during the year, although many of these chapters have little to do with that bird. For example, the bird featured in Chapter 1, Spark Bird!, is a Cedar Waxwing, but it is really about the concept of a “spark” bird, the bird that ignites your lifelong passion for birding. Another chapter ostensibly about Pileated Woodpeckers is actually about how birds get their names and who gets to decide that nomenclature. 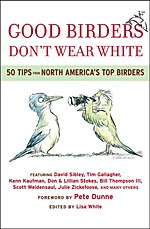 Other sections of the book cover various aspects of modern birding such as birdsong, migration, conservation, technology, volunteering, and finally a philosophical look into the future. All told, this is a useful and interesting addition to the birding library, and recommended reading for all birders. 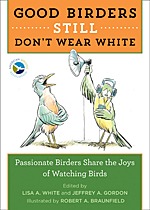 edited by Lisa White and Jeffrey A. Gordon

The first volume contains tips from top birders about getting started in birding. They include tips about setting up feeders in your yard, listening for birdsong, improving your bird photography, and numerous other aspects of birding. The title, which I’ve heard in the field, relates to a pair of Eared Quetzals, a neo-tropical rarity that nested in a preserve in southern Arizona and would get highly agitated whenever a birder wearing white joined the birders watching the nest. This led to a magazine article which extrapolated broadly about why birds would be upset by white clothing. A follow-up chapter questions all of that, suggesting that if you are looking for Eared Quetzal nests in southern Arizona, you should probably not wear white, but it’s okay to do so elsewhere.

The second volume (Still Don’t) is more philosophical, with many of the same authors discussing why they are so passionate about birding. Some have become closer to their children through a mutual love of birds. Another helped to reclaim a local park by reporting every bird he finds on eBird. A third has cultivated his love for Mexican food after every bird walk. What unites them: their passion for birding has helped to inspire their passion for other aspects of their lives.

Join landscape designer Susan Abraham on an enlightening and entertaining[...]

The host for the event, Rose Marie Bogley (second from[...]