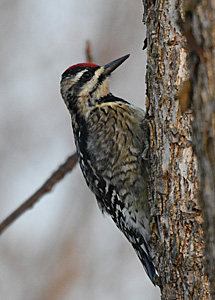 While the 88 species found was a little below our average, we still had a lot of highlights:

We also counted record numbers of five different woodpecker species – maybe because of all the dead Ash trees. We had an incredible 84 Red-headed Woodpeckers, more than 50 percent higher than any other count, as well as 441 Red-bellied Woodpeckers, 135 Yellow-bellied Sapsuckers, 239 Downy Woodpeckers and 102 Pileated Woodpeckers.

While Carolina Chickadee and Tufted Titmouse numbers were still down from our historical averages, they were up from our last couple years, a trend we
hope to see continue.

As is often the case, one of the count’s highlights wasn’t a bird but a Lion’s Mane fungi, found by the team in the Philomont area.

When it was all over, 35 of us enjoyed a great Tally Rally sharing stories about the day and enjoying a tasty and filling meal catered by Mama Lucci’s.

To see our totals and how they compare to our previous 22 years check out the Christmas Bird Count Data.

If you think you’d like to join us next year, put Monday, December 28, 2020 on your calendar for the 24th Central Loudoun CBC.

If you ever have an opportunity to see an eagle’s[...]