How long have you volunteered with Loudoun Wildlife Conservancy and how did you hear about us?

Miriam has volunteered for LWC since it started. She says, “I was so grateful when LWC announced its arrival in 1995 when it was clear the impacts of exponential development on wildlife were becoming irreversible”. Miriam’s work with LWC started with citizen science in her own neighborhood along the South Fork of Catoctin Creek. Today, in partnership with the Waterford Foundation, all the LWC citizen science programs (monitoring bluebirds, stream quality, and amphibians, and bird and butterfly counts) are still ongoing on the 144 acres of the Phillips Farm. 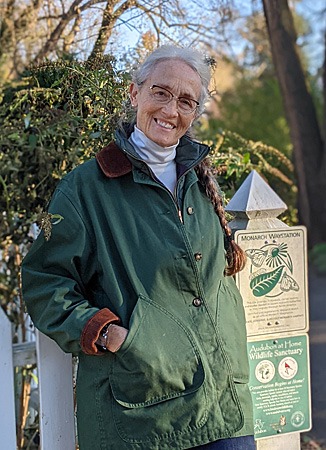 What opportunities have you volunteered for/are signed up for?

Miriam’s greatest hope for our planet lies in education. She says, “Today all the stars have aligned for public understanding that getting kids into nature is not only critical to their health and well-being but also a healthy planet. Our time as nature educators is now.” When Covid arrived, Miriam used the LWC citizen science programs to get neighborhood kids and their parents outside on asynchronous school days. Miriam relays, “I think the parents were as grateful as the kids to get off their screens. The highlight was the amphibian program, finding frog eggs and holding them in their hands.” Miriam worked with LWC to establish her property as an Audubon At Home sanctuary and proudly displays the sign for passers-by who often stop and ask about it as she works in the garden.

What is your favorite natural area in Loudoun County?

Miriam’s favorite natural area is all the open space on mountain ridges and rolling hills. Miriam exclaims, “I get a deep sense of home traveling west from Leesburg as the Blue Ridge becomes visible”. Another favorite spot is the view of the village of Waterford from hills above. She says, “The way it is nestled into the Catoctin Creek forested valley surrounded by valuable open space makes me thankful for the stewardship of the Quakers who settled here in the 1700s and the effort of folks today working hard to protect it on behalf of wildlife”.

Your Environment and Quality of Life Envision Loudoun Meeting The[...]