How long have you volunteered with Loudoun Wildlife Conservancy (LWC) and how did you hear about us? 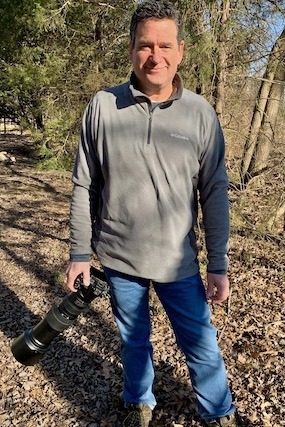 Michael was already out and about photographing local wildlife and found out about LWC when he was looking for local places to find birds. He found the LWC website and then saw the notices about the bird walks. Michael’s first bird walk with us was on February 27, 2016 with Joe Coleman at the Blue Ridge Center for Environmental Studies. He recalls, “We recorded 24 species on that outing, and I was hooked. I have been attending the walks ever since and have learned so much.”

What opportunities have you volunteered for/are signed up for?

Michael has been on the LWC board since June 2019 and primarily works on the finance committee and the JK Black Oak Wildlife Sanctuary committee. He has also participated in tree planting events and leading/co-leading bird walks at Banshee Reeks and the Blue Ridge Center.

What is your favorite natural area in Loudoun County?

Michael believes “We are fortunate to have so many great spots in Loudoun County, but I have to say that my favorite is the Middlesex Drive pond, which is a stone’s throw from my house in South Riding. It’s easy to get to and has lots of bird activity. And, the morning and evening light is great for bird photography.”