Under the Watchful Eyes of Black Vultures at Banshee Reeks

March 13 was a spectacular day for a bird walk at Banshee Reeks Nature Preserve.  With four leaders, the 17 birders were able to split up in two groups.  Michael Sciortino and Mary Ann Good led a team of six participants along the Raspberry Trail and had beautiful views of the azure blue western sky. The Raspberry Trail was relatively quiet with numerous White-throated Sparrows and a sighting of an immature Bald Eagle. We did see far off waterfowl activity in the vicinity of the Goose Creek with upwards of 50 ducks landing. Based on other recent activity in the area, the group agreed that these were likely Ring-Necked Ducks but we were unable to confirm. The group decided to duck into the woods and make our way to the creek to see if we could confirm our waterfowl observation. We were not able to see any evidence of waterfowl activity on the Goose Creek, but we did hear a lone Belted Kingfisher upstream. 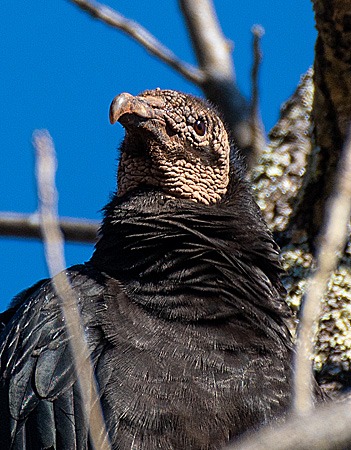 The Lookout Rock Loop trail eventually did pay off with excellent views of both a Ruby-crowned Kinglet and a couple of Golden-crowns as well as other species. The highlight on the loop was the vernal pools and the presence of large amounts of Fairy Shrimp. Black Vultures watched us closely as we passed by their roosting location where Lookout Rock Loop and Raspberry trails merge.

The group led by Colin Little and Joe Coleman used trails that were south and east of the ones used by the other group.  The highlights were a Hermit Thrush, three Fox Sparrows (one of which posed in the open for great looks), and  six of the seven local woodpecker species.  Other avian highlights for both groups were the number of raptors which included four Bald Eagles of various ages, two Northern Harriers, courting Red-shouldered Hawks, and a vocalizing Barred Owl.

The post Under the Watchful Eyes of Black Vultures at Banshee Reeks appeared first on Loudoun Wildlife Conservancy.

The post Under the Watchful Eyes of Black Vultures at Banshee Reeks appeared first on Loudoun Wildlife Conservancy.

When the Ligi Nestlings completed their first birdathon in 2009,[...]

On January 18th, the Board of Supervisors are scheduled to[...]