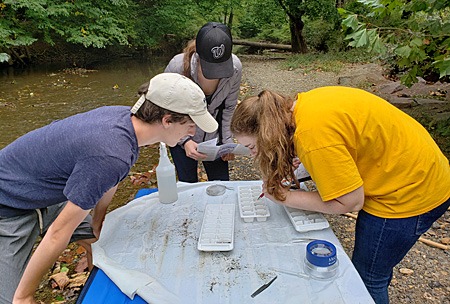 With bicyclists and joggers passing by on the adjacent W&OD trail, Emily Maltman led a group of three volunteers in a benthic macroinvertebrate survey of Tuscarora Creek W&OD site on September 25.

The majority of the macros collected included pollution-sensitive beetles and caddisflies, as well as pollution-tolerant flat worms and worms. A handful of clams, netspinner caddisflies, scuds, and mayflies were also present. The team also discovered a water mite, which has not been identified previously at the site. 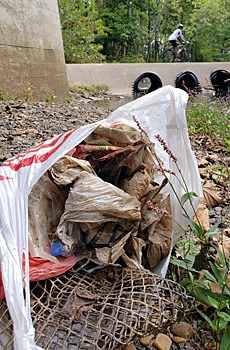 Trash collected from the Tuscarora site.
Photo by Callie McCormick

In addition to these macros, the team also collected quite a bit of trash that included plastic bags, trash bags and even Christmas ornaments!

On October 4, a diesel fuel spill traveled through storm drains in Leesburg and entered Town Branch, which is a tributary of Tuscarora Creek. Both Town Branch and Tuscarora Creek have been impacted by this, but the extent is currently unknown.

76 Species of Birds Found on Walk at Algonkian Park

Colette Berrebi at her stream site on the Black Branch.[...]