On our November 28 bird walk, 11 birders found 35 species of birds on a beautiful late fall morning at the Blue Ridge Center for Environmental Stewardship (BRCES).  The trip was led by Joe Coleman, Michael Sciortino, Mike Scott and Mary Ann Good 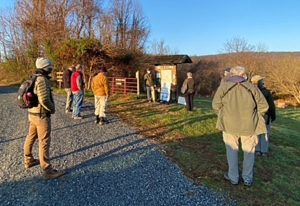 While the most common species was White-throated Sparrow, we also found a number of mixed flocks busily eating berries in the vine-covered hedgerows and edge habitat. The flocks included posing Cedar Waxwings, a couple of Hermit Thrushes, both kinglet species, as well as a couple beautiful Swamp Sparrows. Raptors and high flying birds included a flock of eight Tundra Swans, a Bald Eagle, and at least  three Red-tailed Hawks. We also found six of the seven possible woodpecker species that are here in the winter (Red-headed Woodpeckers appear to have left western Loudoun County for the winter due to an incredibly low mast crop).  For the complete list of birds, see below or view the checklist online at https://ebird.org/checklist/S76796005

The bird walk at BRCES is one of  three regular monthly bird walks led by Loudoun Wildlife Conservancy, except in December (because of Christmas Bird Counts).  If you want to participate in a Christmas Bird Count, there are several that include portions of Loudoun County, including the Central Loudoun CBC sponsored by Loudoun Wildlife, which takes place on Monday, December 28.

Happenings Around the Blue Ridge February 24, 2022

The Making of “Walk for Wildlife”

by Christine Boeckel  “Hey Michael—Could we do a 5K run for[...]