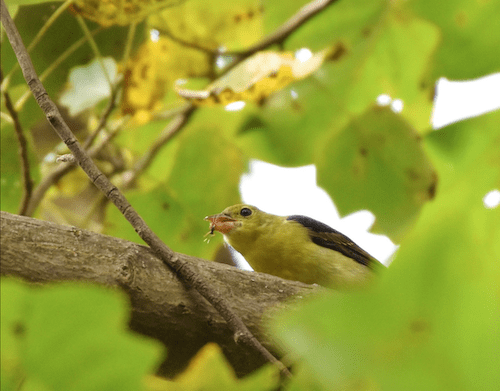 The walk started in light rain, but a singing Red-eyed Vireo beckoned and within a half hour, the skies lightened, temperatures rose and birds were abundant. An early highlight was close-up looks at Scarlet Tanagers; while the male wowed us with his vivid red-and-black plumage, the female, in her brighter-than-olive green, also turned heads. Grasshopper Sparrows buzzed from the tall meadow and a Yellow-billed Cuckoo flew past almost too quickly to identify, while a flock of American Goldfinch, the males sporting their brilliant yellow breeding color, entertained.

The group was fortunate enough to encounter two rarities. The first, a Black-billed Cuckoo, gently called from the forest. But like a much louder Lousiania Waterthrush, it stayed hidden from view. Just as the group was heading back in, a slender and very unusual raptor flying overhead in challenging lighting caught everyone’s attention. All the usual suspects were quickly rejected: not a buteo, not an accipiter, perhaps a falcon? No, its shape and coloration made the call certain: our rarity was a Mississippi Kite.

Special thanks to Mary Ann Good for arranging the hike and the Goodstone Inn for allowing our group to enjoy their lovely grounds.

Plant the ‘Super 9’ for Pollinators and They Will Come