Meet You Wildest Neighbors: Raptors of Virginia, Maryland, and DC 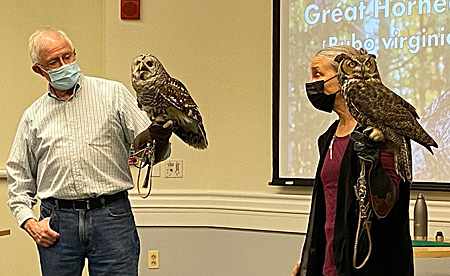 Liz and Tim Dennison with Scarlett and Hodor.
Photo by Michael Sciortino

It was an evening of wonderful raptors on Tuesday, December 7th at Rust Library in Leesburg. Thirty-nine people attended an informative presentation by Liz and Tim Dennison that included the opportunity to get up and close with six of our area’s raptors. Liz Dennison is the founder and president of Secret Garden Birds and Bees, an all volunteer 501 (c) (3) organization that works with wildlife rehabilitators, falconers, naturalists, biologists and beekeepers. After a brief introduction by Joe Coleman, the program kicked off. We were treated to a cavalcade of wildlife ambassadors, each of them with their own harrowing stories. Liz and Tim brought out each raptor one at a time and shared their individual stories of how they came into their care at the Secret Garden. Liz also provided insight on how to visually recognize each of the birds in the wild as well as played samples of each of their calls.

First up for the evening was an adult male Red-tailed Hawk named Big Red. Big Red was hit by a car and suffered injuries to the right side of his body. He is also blind in his right eye making it impossible to return him to the wild. Big Red was followed up with Scarlett who is an adult female Barred Owl. She was brought in for care after also being hit by a car. Hodor, a young adult Great-horned Owl, also suffered a collision with a car and now has limited sight in both eyes. Liz and Tim displayed both Scarlett and Hodor side by side so that the audience could see the size differences between the two owls. 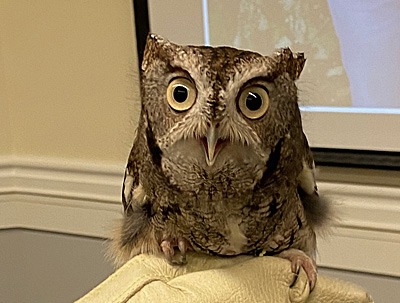 The owls continued when Tim brought out Phantom, a fully grown female Barn Owl that has lived most of her life at the Secret Garden. She was brought in when she was a few weeks old and is the only captive bred bird at the facility. The last owl presented was Kvosir, an Eastern Screech Owl. Kvosir is fully grown despite his small size. He was also hit by a car and was rescued after he was found on the side of the road. The last bird introduced was a spectacular male American Kestral named Pippen. Pippen was found wandering in the streets of Washington D.C., rescued, and eventually made his way to the Secret Garden. Rehabilitators determined that Pippen had imprinted on humans, and any release back into the wild was not an option for him. Full biographies of these special birds can be found on the Secret Garden website.

For those bird enthusiasts that only see or hear these birds occasionally while out in the field or on walks, it was a great opportunity to see them up close and personal. It was heartwarming to hear their stories of rescue and recovery. Liz capped off the presentation by taking questions and sharing the list of key local wildlife rehabilitation centers as a reference in case their services are needed.

A tessellated darter fish.Photo by Amy Ulland Under the shade[...]

Are you an artist – painting, ceramics, poetry, photography, tapestry,[...]