Meet the Muskrats of Loudoun

Muskrat Susie, Muskrat Sam … OK you probably know the song that was a hit for Captain and Tennille back in 1976, and most people either like it or loathe it. Nevertheless these medium-sized, semi-aquatic rodents are part of the Loudoun County landscape and are native to North America, found over most of Canada and the United States and a small part of northern Mexico. Muskrat trapping for its fur became an important industry in northern North America in the early 20th century. The fur is noted for its warmth and was used for coats and hats. They were introduced as a fur resource and have spread throughout northern Europe and Asia.

Muskrats grow to be 2 to 4 pounds and 16 to 28 inches long, with half of that being the tail, which is 8 to 11 inches long. Their fur is dense, medium to dark brown, and has two layers, which provide protection from cold water. To aid them in swimming, their tails are slightly flattened vertically and covered with scales rather than hair. The character of the tail alone is sufficient to distinguish the Muskrat from all other mammals. Their hind feet are semi-webbed, although when swimming their tails are the main means of propulsion. 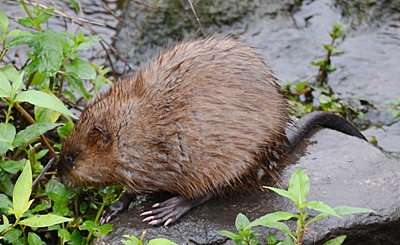 A muskrat spotted at the Broadlands wetlands boardwalk in Loudoun County.
Photo by Gerco Hoogeweg

The Muskrat (Ondatra zibethicus) is the only species in the genus Ondatra in the subfamily of rodents that includes voles and lemmings (but not rats). The Muskrat’s name derives from Native American muscascus or musquash, and because the Muskrat secretes a musky odor (zibethicus is Latin for musky), British colonists gave it the common name musk-beaver, later altered to Muskrat due to the animal’s resemblance to the brown rat.

Muskrats inhabit marshes, ponds, lakes, and streams, particularly where there are cattails, rushes, water lilies, and open water. Muskrats burrow into stream or river banks to create a nest with an underwater entrance, or in marshes with less of a bank they build small lodges 2 to 3 feet above water made out of vegetation and mud with a side entrance above the water line. Marsh lodges stay in place due to the lack of current but can sometimes be swept away by spring floods. Trumpeter Swans sometimes build their nests on top of muskrat lodges. Muskrats feed on aquatic vegetation including cattails and water lilies and occasionally freshwater clams, frogs, and fish. They also eat alfalfa, clover, corn, and other crops that happen to be in their territory. Muskrats are prolific breeders, and females can have two or three litters a year of six to eight young.

Muskrats have been seen throughout Loudoun County, for example at Bles Park and in the marshy area at Horsepen Run in Sterling, but are not as plentiful as in locations such as Fairfax County, where perhaps there are not as many of the predators that hunt Muskrat. These include mink (a major predator), otters, bobcats, house cats, domestic dogs, coyotes, foxes, eagles, large hawks and owls, and even bass.

Muskrats make a valuable contribution to aquatic communities. By harvesting plants for food and den sites, they create open water for ducks, geese, shorebirds, and other wildlife. In addition, a variety of animals — including snakes, turtles, frogs, ducks, and geese — use muskrat lodges and platforms to rest and nest. Muskrats are, however, considered pests when their burrowing activity damages dams and dikes, and when their feeding activity damages new plantings and crops.

Lastly, if you ever bump into Susie and Sam doing the jitterbug out in Muskrat Land, it’s possible they may indignantly remind you that, regardless of their name, they are not members of the genus Rattus!

The post Meet the Muskrats of Loudoun appeared first on Loudoun Wildlife Conservancy.

The post Meet the Muskrats of Loudoun appeared first on Loudoun Wildlife Conservancy.

Our Upcoming Events in Fauquier

Nearby Events Dear [[First_Name]], Planning your month? This weekend is[...]