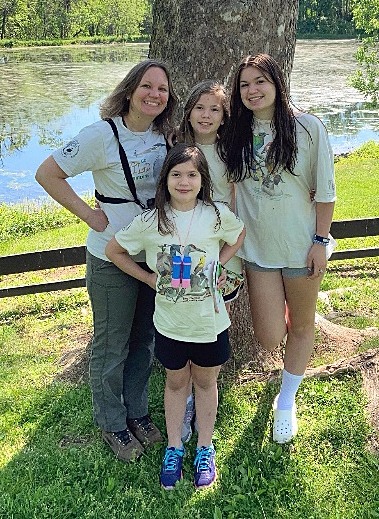 The Ligi Nestlings (Spring, McKenzie, Addison and Catherine Ligi)  kicked off their 13th Birdathon at the Blue Ridge Center, where we were treated to an adult and immature Bald Eagle slowly circling above us. Wow! We heard and saw several Indigo Buntings and had a great opportunity to show the girls what an Eastern Kingbird looks like. The highlights at Olde Izaak Walton Park included a Green Heron that flew across the pond, an adorable baby turtle the size of a hockey puck, and a groundhog that darted across the path in front of us.

At Claude Moore Park, a Great Blue Heron landed within 20 feet and entertained us by catching and eating a fish. We laughed as we watched the baby Canada Geese and Mallards try to keep up with their parents. An Orchard Oriole bid us a sweet farewell as we headed off to lunch and Whites Ford Regional Park where we enjoyed great looks at the two black bands of a Killdeer sitting in the grass. We discussed how Killdeer pretend to have a broken wing to distract predators away from the nest. After playing along the river for a while, we discovered a black rat snake along the path to the car. The girls were startled at first, but curiosity got the best of them and they slowly crept in for a closer look. Our last bird of the day was also our most surprising — a Red-headed Woodpecker along Spinks Ferry Road. And of course, we celebrated another successful Birdathon with big bowls of ice cream at Sweet Frog.

Addison really impressed me with her birding knowledge. She identified 20 species on her own and has a good sense of which birds can be found in different habitats. In true teenager fashion, McKenzie was more interested in her phone than the birds, but she popped her head up every now and then to add to the conversation. Catherine is learning how to write in first grade and was excited to record the birds we saw in her notebook. She said her favorite was the Rock Pigeon — go figure!

A big thanks goes to our friends and family for their generous support and encouragement along the way. We found 38 species and have raised over $1,200 thus far to support Loudoun Wildlife Conservancy’s bird-friendly educational programs, habitat restoration, and citizen science projects! A special thanks goes to dad, our honorary team member, whose birding (and corralling) skills have also grown over the years. He is a big reason for our success. Happy birding! 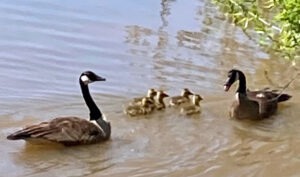 Taking entries for our 2017 Photo Contest

The first full week of February is among us at[...]

Restore Half Your Lawn to Native to Save Us All