Although it was one of the coldest mornings of the year (17 degrees), five people showed up for the regular bird walk on January 8 at Banshee Reeks Nature Preserve. Fortunately it was a calm and sunny morning. While there weren’t very many birds moving around when we started, that changed as the walk progressed. Because the ground was covered in snow and likely to be icy on any slopes, we spent most of our time on somewhat level trails. 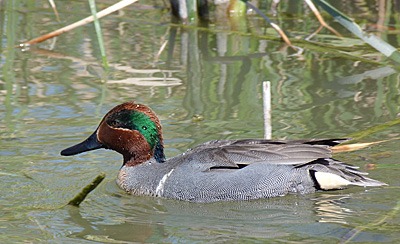 We ended up finding 33 species, of which the highlights were a flock of Green-winged Teals (apparently spooked by duck hunters on the nearby Goose Creek) that briefly landed on the Beaver Pond southeast of the Visitor Center and three Red-tailed Hawks. While not long ago Red-tails were  the most common hawk in Virginia, Red-shouldered Hawks, of which we saw only one, are now ubiquitous throughout the County.

When we wrapped up the walk about 10:15 am, not only had the temperature risen to a balmy 24 degrees (which actually felt comfortable), but both species of vultures had finally decided to start flying.

For a complete list of the birds observed at Banshee Reeks during out walk, see below or on eBird at: https://ebird.org/checklist/S100335916

The regular bird walk on the second Saturday of every month at the Banshee Reeks Nature preserve is sponsored by Loudoun Wildlife Conservancy and the Friends of Banshee Reeks.

The post Green-winged Teals Are the Highlight of a Cold Morning at Banshee Reeks appeared first on Loudoun Wildlife Conservancy.

Planning Updates: Albemarle County and the City of Charlottesville

Albemarle County and the City of Charlottesville are considering significant[...]

Loudoun Bluebird Notes is published several times a year for[...]