Friend of the Mountain Award 2017 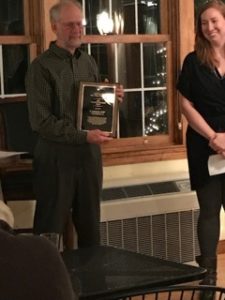 Friends of the Blue Ridge Mountains presented the 2017 “Friend of the Mountain Award” to  longtime environmental advocate W. Joseph Coleman, Jr. at their Annual Meeting, November 30, 2017 at Doukenie Winery near Hillsboro, Virginia.   At the ceremony Joe was presented with a plaque which reads: “In recognition of his significant conservation initiatives and many years of volunteer efforts to protect wildlife and their habitats, advocate for the environment, promote citizen science, secure conservation easements, and engage individuals of all ages in discovering the wonder of the natural world – all of which contribute to preserving, enhancing, and celebrating our Blue Ridge and its foothills.”

Joe’s involvement in Loudoun County environmental activities as strong advocate for Birding, the environment, and the ‘Natural World’ is virtually legendary.  In 1995, recognizing the threats of rapid development in one of  the fastest growing counties in America, Joe, along with 2 others, founded the Loudoun Wildlife Conservancy for ‘protection and proliferation of wildlife habitat’.  From its humble beginning of 30 members, the Conservancy has grown to over 800 volunteers who participate in many citizen science and advocacy activities. Joe is currently its President and in this role he led the campaign to create the Banshee Reeks Nature Preserve in 1999 and in 2000 became the first President of the Friends of Banshee Reeks.

When he is not volunteering with the Loudoun Wildlife Conservancy, Joe is the Treasurer and also the Chairman of the Conservation and Land Use Committee of the Board of Directors of the Blue Ridge Center for Environmental Stewardship, and a Past President of the Virginia Society of Ornithology.  He was the President of the Board of Directors of the Audubon Naturalist Society from 2003 to 2005 and on its Board from 2000 to 2006.  He also served on the Board of Directors of the Land Trust of Virginia from 1996 to 2006, and currently serves on their Easement Acquisition Committee.  Since 1997, Joe has organized and compiled the Central Loudoun Christmas Bird Count and he frequently leads free bird walks at sites around Loudoun County.  Loudoun is indeed fortunate that Joe has invested so much of his time and energy in keeping its environment and wildlife at the forefront of the hustle and bustle of this rapidly changing region.

Have you found yourself spending more time walking and biking[...]

Masters of Mimicry and Deception in the Insect World

From appearance to behavior, insects have developed elaborate ruses to[...]