Book Review: A Natural History of the Future by Rob Dunn

Are humans on a path to destroy nature?

Conventional wisdom says yes, that through climate change, destruction of natural habitat, overuse of herbicides and pesticides, and a long series of other sins, human action could lead to the demise of nature.

Rob Dunn, professor of applied ecology and author of A Natural History of the Future, disagrees. He believes that we’ve got it backwards: people are not going to destroy nature but instead are setting the stage for nature to destroy us. While humans and some larger life forms may go extinct — all species do eventually — microscopic parasites and insects like Aedes mosquitos will survive long after we are gone. 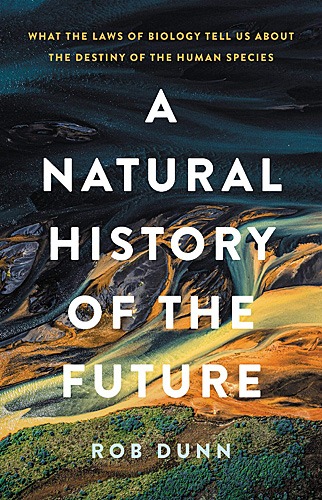 Dunn returns over and over again to a scientific experiment now known as the megaplate . Scientists set up a large Petri dish (2 ft. x 4 ft.), divided the plate like a football field with two end zones and seven strips between them, and filled it with agar, a favorite food of bacteria. In the two strips next to the end zones, a mild solution of an antibiotic was applied, then a 10x stronger solution in the next strips, 100x stronger in the next two, and 1000x stronger in the center. A small colony of E. coli was then placed in each end zone.

The E. coli was expected to spread across the end zones and try to cross into the first strips only to be killed by the antibiotic, eventually starving when all of the agar in the end zone was consumed. That didn’t happen. Instead, one or a few bacteria mutated to become resistant to the mild antibiotic, then multiplied to fill the first strip. Mutations occurred repeatedly at the edge of each strip until E. coli filled the entire plate. This process took 12 days. (Click here to see a video of the experiment.)

Shocked at this outcome, the scientists repeated the experiment multiple times, all with the same result. A newer, more powerful, antibiotic slowed the process to 14 days. The conclusion drawn from this experiment is that faced with the prospect of extinction, a dangerous parasite can evolve in a few weeks* to become resistant to the most powerful weapon humans have created to combat it.

The megaplate is both an example of how fast the law of natural selection can work in a closed system, and a metaphor for how human attempts to destroy what we perceive as an enemy can go horribly wrong. As Dunn points out, the corn monoculture of the American Midwest is a megaplate. If a Roundup-resistant corn fungus were to evolve and take hold, it could destroy the crop and the economy with it in very short order.

There is a lot of conjecture about how an increase in temperature due to climate change will affect us. In Dunn’s view, this is a simple problem: if our average daily temperature increases by five degrees, our living conditions will come to resemble places where that climate exists now. Southern Florida will be like the rainforests of Central America.

This brings into play another natural law that will come to haunt us. The law of escape holds that species will benefit when they can evade their natural predators. The wildlife of the Central American rainforest, like jaguars and howler monkeys, may not be able to escape to Miami because there is not a clear pathway for them to get there. However, the parasites of the rainforest have many routes, and will have no trouble bringing north the diseases of the rainforest like malaria, dengue fever, and yellow fever.

Although the laws of nature all point to a future where parasites continue to flourish as humans and larger wildlife decline, Dunn tells us that we should not lose hope as long as we take steps to reverse the process. “Our best bet for extending our stay on this planet is a humble one: to pay attention to the laws of life and work with them rather than against them.”

To do this, we need to reduce greenhouse gas emissions to preserve the viability of the niches that are best suited for human habitation. We must also do all that we can to save the ecosystems on which we depend, or might depend upon for food. We have to provide corridors for beneficial species to travel to new homes when their current homes become uninhabitable. And finally, we need to manage our own ecosystems to keep the parasites at bay.

If we can do all of that, Dunn assures us, we have a good chance of surviving here on megaplate Earth.

The post Book Review: A Natural History of the Future by Rob Dunn appeared first on Loudoun Wildlife Conservancy.

Animal welfare and rehabilitation organizations in the area, including the[...]

This year our lives have been dramatically impacted by the[...]