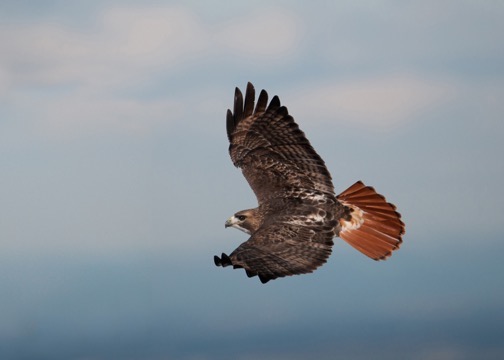 The scream coming from the sky causes you to look up and see a beautiful hawk soaring overhead. As the hawk turns in the sunlight after a few more screams, you get a glimpse of a brilliant orange tail and immediately recognize an adult Red-tailed Hawk. Her scream is a warning call, alerting her mate and young of a possible threat while at the same time letting you know that she sees you in her territory.

Surveying the surroundings, you notice an old farm field adjacent to rich woodland. This type of habitat is one of the favorite haunts of our eastern Red-tailed Hawks. It provides food, shelter, and nesting sites, all important ingredients for their survival.

Looking back up at the Red-tail, you can’t but help notice how big it is. Red-tailed Hawks (Buteo jamaicensis) are one of the largest hawks in North America. Wingspreads may be up to three feet across, and the largest may weigh up to three and a half pounds, far more than the diminutive Sharp-shinned Hawk (Accipiter striatus), weighing in at four ounces. Only the western Ferruginous Hawk (Buteo regalis) is larger.

Red-tailed Hawks, along with Red-shouldered Hawks (Buteo lineatis) and Broad-winged Hawks (Buteo platypterus), are referred to as soaring hawks belonging to the genus Buteo. As one of the largest of the group, Red-tails have tremendous strength, an adaptation that allows them to catch and eat a wide variety of game. Red-tails are known to eat anything from grasshoppers to snakes, field mice (their favorite), and even larger prey such as rabbits and gray squirrels.

In fact, Red-tailed Hawks are one of the greatest threats to gray squirrels. It would be safe to say that the squirrel’s evolutionary adaptations of camouflage, slipping behind trunks, and quickly seeking holes when threatened may be due to the pressure placed upon them by Red-tails. The Red-tail’s versatility when it comes to hunting is perhaps the reason it is the most wide-spread and adaptable species of raptor in North America.

Identification of all raptors can be rather tricky, but there are several ways to identify a Red-tail. First, of course, is the tail itself. Adults sport an upper tail surface that is deep reddish orange tipped with white and highlighted with a black subterminal band about half an inch from the end. The top of the body is chocolate brown, broken with mottled patterns of white. Particularly noticeable is the light V that appears on the back between their wings when perched. Their lower body feathers tend to be cream-colored but may on occasion show a hint of red on the chest. Sometimes the belly and legs are splashed with streaks of reddish brown.

The trouble with identifying Red-tails has to do with the immature birds. Lacking a red tail, look for a belly sprinkled with bold, dark splashes of brown that give the appearance of a “belly band” when seen from a distance. In flight, all Red-tails sport diagnostic dark patches on the forefront of their open wings known as patagial marks. No other buteo has these marks, so they make identification of Red-tails easy if you know what to look for.

On rare occasions one may see white color morphs of the Red-tailed Hawk. These white color morphs are often referred to as albinos, but in actuality many of these birds are only partially white and it is probably incorrect to refer to them as albinos. A better term might be leucistic. Every few years one will show up in Loudoun or surrounding counties.

Wild adult Red-tails have a life span that can range up to 20 years, although 10 to 15 years is more likely. In captivity they may live up to 35 years. Although Red-tails gain their adult plumage at the start of their second year, breeding maturity usually begins at age three. Courtship generally commences in mid-February with aerial displays by the male, diving down from above toward the female and then rocketing back up again. The action is reminiscent of a roller coaster going up and down.

By mid-March the pair will be well into nest building and laying two to three eggs. Incubation of the eggs lasts 28 to 32 days, and when the young hatch they will be covered with white, fluffy down that is slowly replaced by body feathers. By five weeks the young are strengthening their wings with continuous flapping on the nest, a prelude to their first free flight. Fledging occurs around seven weeks of age (42–46 days), which generally occurs around mid-June. The parents will continue feeding the young for another four to six weeks or longer as they become proficient enough to hunt on their own. 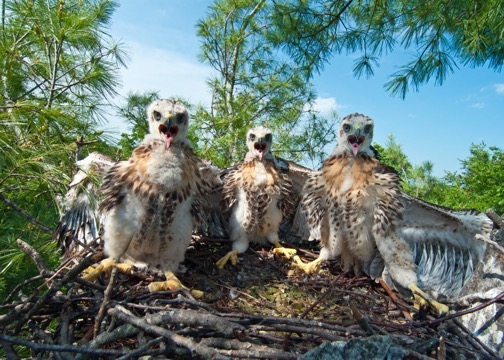 Hunting, either for the chicks or for themselves, may be done in several ways. The easiest method for the hawk is to perch in a suitable area and watch quietly for prey such as field mice to move about below. Once a mouse is spotted, the Red-tail simply flies or dives out of the tree to catch it. It should be noted that Red-tails like to perch hunt from high in trees whereas Red-shouldered Hawks often hunt much closer to the ground. Often Red-shoulders will sit on the top rail of wooden fences or the lowest thick wire between power poles to hunt. Rarely will a Red-tail take such a low perch.

When trying to identify hawks, it is not just what they look like that that helps but their behavior as well. Red-tails don’t just perch hunt. Often they become much more energetic, particularly when trying to pursue something more active, like a squirrel. These chases can last for several minutes as the hawk pursues its quarry up, down, and around trees and across the forest floor. The hunt ends in one of two ways: with the squirrel escaping into a hole which is its only safe hideaway, or being caught.

Soaring is another method of hunting employed by Red-tails. Using a good thermal updraft, a Red-tailed Hawk can stay above a field almost indefinitely as it searches for mice and other prey. Once it spots something, the Red-tail will swoop down to capture the unsuspecting victim. That method is also used over wood-lots to hunt squirrels and chipmunks. This type of hunting is often seen in Red-tails while on migration, when they don’t have time to hunt from a perch.

Migration is also a great time to see Red-tails. During the fall thousands of northern Redtailed Hawks will stream down the mountain tops in search of better winter feeding grounds. One of their migration pathways is along the Blue Ridge Mountains on the western border of Loudoun. On cold, blustery days of late October and early November hundreds will pass by, flying just above the treetops — a spectacular sight. Snickers Gap hawk watch on Route 7 is one such place to observe them, but there are several other sites too, such as Waggoner’s Gap and Hawk Mountain.

Fortunately, you don’t often have to wait until migration to see Red-tailed Hawks here in Loudoun. Sometimes all you have to do is take a walk outside to find one. Even as Loudoun County changes from an agrarian landscape to that of a more urban environment, Red-tails are adapting to fit in. This bold and beautiful hawk should grace our skies for a long time to come.

An update on Loudoun County’s proposal to install athletic field[...]

Writing in Nature: Variations on the Theme of Containers

Taking on State Law in Defense of Family Farms

It’s reasonable that Mike and Tina Roebuck want to hold[...]