Birds of Loudoun: A Guide Based on the 2009-2014 Loudoun County Bird Atlas

Please join us at these upcoming events! 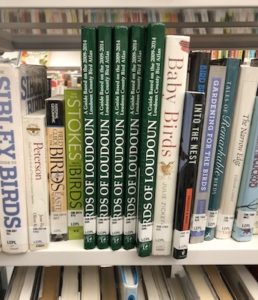 Loudoun County’s extensive diversity of natural areas comprised of rich riparian buffers along the Potomac and its tributaries, large upland forests along the Blue Ridge and its other ridges, many farms and meadows, and its occasional park results in an abundant and diverse bird life. Using the extensive information gained from the Loudoun Wildlife Conservancy’s five year bird atlas and resultant book, the Birds of Loudoun, Joe Coleman, avid birder, will discuss and show slides of some of the 262 species of birds found in Loudoun. He’ll also identify the best spots to find them and discuss what the future likely holds for them. This free program is co-sponsored by the Loudoun County Public Library.

“The book is really awesome. When I pick it up and start reading, I get so engrossed that I lose track of time! It’s dangerously good.” – Jane Yocum

Beginning with an introduction to atlasing and a brief lesson on Loudoun’s geography, the book then dives into the results of the five-year Bird Atlas where 85 volunteer atlasers reported 262 species over the span of 5,900 field hours. Rare and exciting finds are highlighted (for example, the first confirmation of breeding Hooded Mergansers in Loudoun!) and comparisons are drawn between this dataset and data from the 1985-1989 Virginia Breeding Bird Atlas. Which of Loudoun’s birds have thrived amidst all the changes the county has undergone over the past 25 years? Which need our help the most? Loudoun’s most species-rich areas are revealed, with possible explanations for these somewhat surprising findings.

The bulk of the book consists of accounts for each documented atlas species, generally a page in length for breeding birds and half a page for migrants and winter birds. The accounts provide information regarding the appearance, habitat, breeding behavior (when applicable), and conservation status. Written by 10 local birders, the accounts emphasize the species’ connections to Loudoun and include a distribution map. The general occurrence of the species in Loudoun is provided, indicating how likely the bird is to be detected in appropriate habitat in the correct season. Accounts of breeding birds highlight the earliest and latest dates that breeding was confirmed during the Bird Atlas. Non-breeding (winter and migrant) accounts highlight the earliest and latest seasonal sightings or northerly/southerly migration periods as documented during the Bird Atlas.

The accounts are brought to life with stunning photographs taken by 18 mostly local photographers. Whenever possible, changes from the 1985-1989 Virginia Breeding Bird Atlas are discussed and trends from over 20 years of Central Loudoun Christmas Bird Counts are noted. Data from other local sources such as Snickers Gap Hawkwatch, Loudoun Wildlife’s bluebird trail monitoring program, and Banshee Reek’s banding station are also incorporated, along with larger scale trends from the North American Breeding Bird Survey and Partners in Flight.

Birds of Loudoun concludes with a list of great places to bird throughout the county, highlighting possible species at each location. Suggestions for putting the data into action are included, along with recognition of the many volunteers that donated their time and talent to this substantial endeavor. Sample species accounts can be viewed here, along with a Birds of Loudoun Checklist and other atlas information.

Orders for the book can be placed here for $34.95. Any questions, including wholesale pricing, can be directed to Michael Myers at mmyers@loudounwildlife.org.

To protect the environmentally sensitive habitat and rare species, JK[...]

Birds, Wildflowers and a Young Toad at the Blue Ridge Center

An update on Loudoun County’s proposal to install athletic field[...]