It was a rather warm and muggy night for the amphibian walk on June 26.  Fortunately,  the heavy rains of the weeks prior filled the fairy shrimp vernal pool which had just recently dried out.  It also refilled the LeSabre pond, which was only one-third capacity a couple of weeks prior. 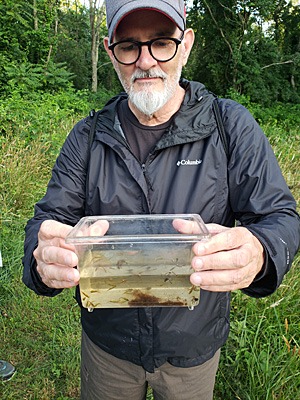 Checking out the Summer Fairy Shrimp.
Photo by Jenny Erickson

Led by Jenny Erickson, the group was able to experience a  non-amphibian inhabitant of the fairy shrimp vernal pool. Summer Fairy Shrimp have made an appearance in large numbers in this vernal pool, which is very exciting.   In addition,  they were able to view some tadpoles who currently inhabit the vernal pool.

The level of excitement increased at the LeSabre pond just after sunset.  There is a strong constant population of Green Frogs in the pond and could be heard calling as we approached.   The real show came as the Gray Tree Frogs started calling in large numbers from the trees around us.  As it became darker, the calls became louder and more numerous.   The participants were treated to large numbers of Gray Tree Frogs migrating from the trees to the pond.  The area was so saturated with the tree frogs that they were jumping onto us as they reached the pond.  The sound of the calls became deafening.  This gave the participants many photo opportunities.

It was a fun and entertaining amphibian walk for everyone involved.

Give Local Piedmont – Until Midnight Tuesday

Participate in the 25th Anniversary Celebration

This year marks our 25th anniversary. To celebrate this momentous[...]