A Good Day for Ducks

Twelve birders gathered at Ashburn Lake on Sunday, March 9 to start Loudoun Wildlife’s annual waterfowl tour.  The morning was warm, clear, and without a trace of wind – perfect weather for watching ducks.  Unfortunately, the ducks did not show up in quite the numbers we might have wished.  A handful of Mallards, Common Mergansers, and about 20 Ruddy Ducks were joined by a few American Coots, Pied-billed Grebes, and one Belted Kingfisher.  But though the numbers were few, the small size of Ashburn Lake ensured that we all got excellent close-up views of the birds.  We were even able to see the bills on a few Ruddies just beginning to turn the powder blue that comes with the spring molt to breeding plumage. 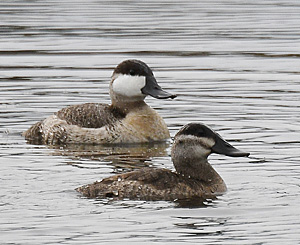 What really caught our eyes at this stop, however, were a dozen or so Great Blue Herons.  They seemed to be in constant flight, singly and in pairs, from the water’s edge to strategic perches in the trees and back again, always moving, everywhere, unavoidable.  We literally could not get our eyes off them.

If we wondered where the ducks were, our second stop answered that question.  We packed into three cars and made our way down Alford Drive to the southeast corner of Beaverdam Reservoir. Here were ducks – more than we had hoped for, and within range for easy identification and appreciation. Ring-billed Ducks predominated, numbering about 250.  There were dozens of Mallards, green heads glistening in the sun. Gadwall and Wigeon cruised back and forth along the emergent vegetation in the background. Redheads and Canvasbacks drew a lot attention, as did Green-winged Teal.  And after long, persistent searching, we finally found what may have been our favorite – an elegant Northern Pintail. When noon took us by surprise, we had seen 13 species of waterfowl, along with a few woodland distractions such as a Hermit Thrush. It is safe to say, we were all feeling satisfied and delighted. It really was a good day for ducks.

The post A Good Day for Ducks appeared first on Loudoun Wildlife Conservancy.

The post A Good Day for Ducks appeared first on Loudoun Wildlife Conservancy.

Happenings Around the Blue Ridge

A Landscape Under Threat

The post A Landscape Under Threat appeared first on Land[...]

On January 18th, the Board of Supervisors are scheduled to[...]